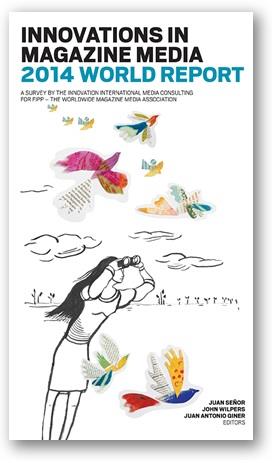 The fifth Innovations in Magazine Media World Report presents the roadmap for successful magazine media strategy. It features four of the major changes exploding on the magazine media front: mobile as the dominant platform, big data, video and native advertising.

These five phenomena have moved from the idea, early adoption, or too-resource-intensive stage to becoming accessible, critical elements of publishing:

Mobile will very soon become the dominant platform for information distribution and consumption, and it is so revolutionary that some are calling it a “do-over” chance for legacy media who got the whole internet thing so terribly wrong.

Meanwhile, video has also quickly become the most effective, most powerful, and fastest-growing method of delivering content and advertising to the largest audience, all in ways that are increasingly accessible to all publishers, not just those with big budgets.
Programmatic advertising suddenly appears on its way to becoming the way most ads will be sold and scheduled.

Big data is now able to put serious science and analysis behind every decision we make in magazine publishing, from content to advertising to new products to customer relations. Not that every decision should be data-driven--but we’re fools to ignore it.
And, finally, native advertising is revolutionising the world of content, advertiser magazine relationships, advertiser-reader relationships, and revenue models.

The report also looks at global case studies providing insight on everything from e-commerce and m-commerce, print innovations, events and conferences, innovation labs, start-ups to watch and magazines making a buzz, to Google Glass and finally magazines you can plant and a magazine as a mobile wifi spot.